Starting a new life in an unfamiliar country can be overwhelming and scary. For Fanta, adding several barriers including a lack of job history and being hard of hearing made the task of finding employment feel almost unachievable. Until she found Goodwill.

Fanta’s life in war-torn Liberia, Africa was a difficult one. She labored hard on a farm, walking many 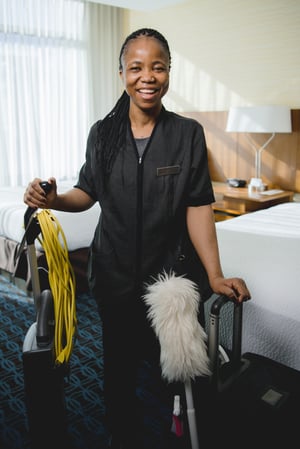 miles each day carrying heavy baskets of produce to sell at markets. Due to the high risk of Malaria where Fanta lived, she received a medication that ultimately caused significant hearing loss. While living in a refugee camp, Fanta was given the opportunity to emigrate to the United States. Though intimidated by this significant life change – moving to a new country where she knew no one – Fanta showed great courage, took a leap of faith and landed in Chicago.

Fanta’s arrival was not an easy one; she knew little English, and her inability to hear well only added to the challenge of obtaining housing, transportation and employment. What she did have was a network of organizations that helped refugees settle into their new country. Fanta began working with the Illinois Department of Rehabilitation, and when it came to finding employment, she was referred to Goodwill.

Fanta’s first steps with Goodwill began in our Workforce Connection Centers (WCCs). She was assigned a Goodwill Career Coach who assists the Deaf and Hard of Hearing community. Her Career Coach, Laird, provided one-on-one training, mentoring and support for all the steps in Fanta’s employment journey. Through the WCCs, Fanta received a wide range of services, from pre-employment and computer skills training, to resume development and mock interviews. The job search process also helped her English and sign language skills grow. It wasn’t long before Fanta began interviewing, and employers were immediately impressed with her strong work ethic.

Today, Fanta has secured full-time employment at Chicago’s Fairfield Inn & Suites where she works as a Housekeeper. She has not only found financial independence in her job but has also found the bond of friendship with those she works with. Fanta’s smile lights up the room when she talks about the accomplishments she has made and the barriers she has overcome. Her life is better than she ever thought possible. “I don’t know what I would do without Goodwill’s help,” she says.